Drakensberghiker also offers interesting and informative overland tours of Southern Africa through our sister business. Southern Africa Overland 4×4 Tours, and wilderness trails in Hluhluwe-Umfolozi Game Reserve and where ever possible we like to do a bit of fly fishing.  Drakensberg Hiker can tailor-make a South African adventure holiday to suit your requirements. 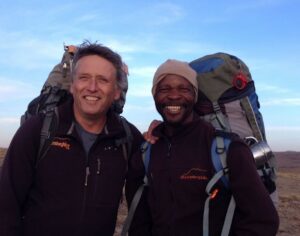 Drakensberghiker’s owner, Ian Shooter was born and grew up in South Africa.

When he joined the Boy Scouts at the age of 11, he started a life-long fascination with the South African Drakensberg mountains.

Ian is registered with the South African Mountaineering Development & Training Trust as an Advanced Mountain Walk Leader. He offers his considerable expertise, knowledge and love of South Africa and the Drakensberg to anyone keen to explore it on a guided hike through this remarkable mountain range.

After completing his national service, Ian studied and worked as a paramedic before moving on to study horse mastership.

He eventually moved to Canada, where he ran his own equestrian center, he also spent a great deal of time hiking, skiing and ice-climbing in the Canadian Rockies.

After 10 years in Canada, he returned to his roots in South Africa to start his own business.

He says his office is better than Bill Gates office. There is nothing much better than arranging guided Drakensberg hikes in South Africa, and overland tours of Lesotho.

Ian’s love of South Africa, the Drakensberg, and knowledge of South African flora and fauna, and regional history is immediately evident. He is a strong and enthusiastic hike leader.

When not hiking in the South African Drakensberg, he spends his time mountain biking, trail running and canoeing (kayaking).

The most magnificent mountain range in South Africa and it is my office.  Doesn’t get better than that. The name has an Afrikaans origin, the word “Drakensberg” means ‘dragon’s mountain’.  The Zulu name for the Drakensberg is uKhahlamba, meaning ‘barrier of spears’.

The Drakensberg is the highest mountain range in South Africa, rising to 3,482m above sea level.  It runs almost parallel to the coast in the eastern part of South Africa. The whole range is about 1000km long. However we spend our time hiking in the KwaZulu Natal part. From the Sentinal in the north all the way to Bushmans nek in the south and 230km long.  This is the most impressive part of the Drakensberg with an escarpment edge over 1000m high. The Drakensberg Mountains separate the province of KwaZulu Natal from Lesotho and the Free State.  These mountains offer some of the best opportunities for hiking, backpacking and bird-watching.

It is made up of sedimentary rock capped by a solid basalt layer that can be up to 1400m thick in places.  In other words it is actually volcanic. if you want to know more you have to join one of our hikes. Weathering and erosion has reduced the mountain range’s size and has caused the plateau to erode away in places. This ends up forming steep-sided blocks and the fantastic spiraling pinnacles which make for incredible scenery. We can take amazing photos of stunning views and the best is we are not way up high where we may get altitude sickness. Our FaceBook Page has pictures of some of the spectacular vistas, rare bird life and flowers to be seen on some of our guided hikes in the South African Drakensberg. 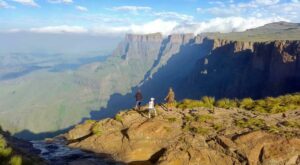 Standing next to the Tugela falls on top of the Amphitheatre

The uKahlamba-Drakensberg Park, which extends along the escarpment of the Drakensberg is recognized by UNESCO as a World Heritage Site. They are very important to South Africa as the country gets a lot of it’s fresh water from these stunning mountains.  Hiking here is part of the South African experience of a lifetime. 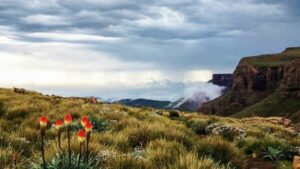 Red hot pokers are common in the Drakensberg in summer.

The Drakensberg’s habitat is very unique and contains some of the most remarkable and diverse range of plants, birds and animal life. This tough wildlife has had to adapt to their harsh environment in the Drakensberg mountains. 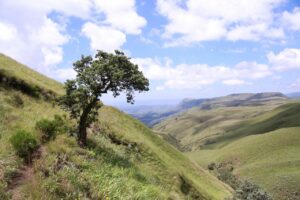 Covering 250 000ha of wilderness area, the South African Drakensberg is totally wild. Hiking here requires a real sense of adventure. We love the fact that there are no paths, camp site or signs telling us where to go while hiking on top of the escarpment.

In many cases, the only way to see this wild place is with an experienced guide.