Previous Next
Why I hiked the Drakensberg Grand Traverse 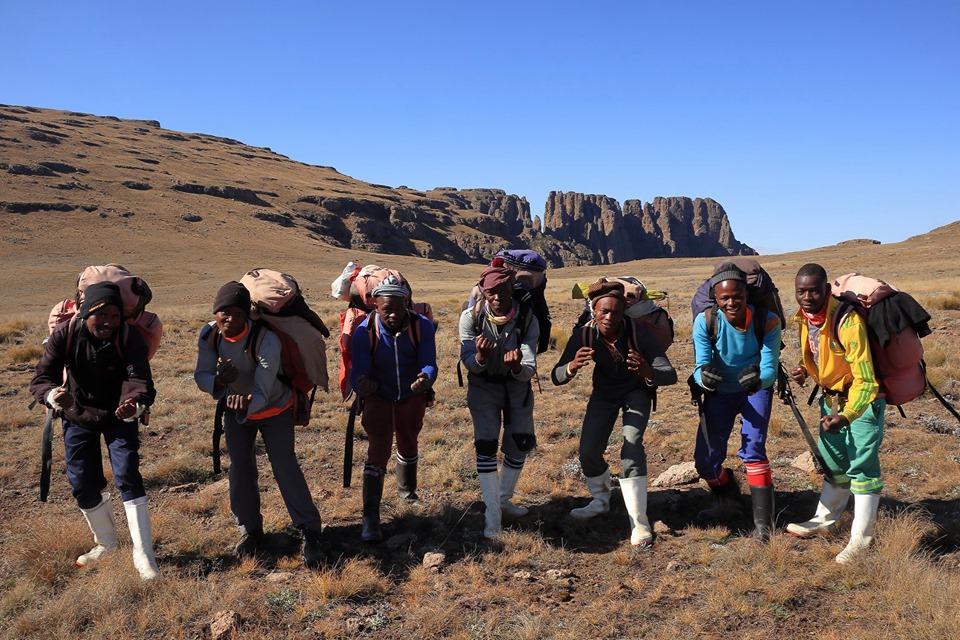 Why I hiked the Drakensberg Grand Traverse.

George Clooney placed his warm hand on the small of my back and guided me gently on to the gondola for our Venetian sunset ride. Suddenly, a loud bellow rang out, ‘kettle’s boiled!’ Wait, that can’t be right. Slowly, I opened one swollen eye to see a billowing orange canvas.

I was in a freezing cold tent with an howling, angry wind outside, perched somewhere on top of the Drakensberg. The desire to stay huddled with George in my warm cocoon of a sleeping bag was overridden by the promise of coffee and breakfast and the desperate need to pee.
I had slept wearing every item of clothing I had with me, including beanie, buff and gloves so all I had to do was shove my feet into my boots and run hunched over against the arctic wind to the ‘mess’ tent.

I had been told that it could get cold up here but I had no idea it was going to try and kill me.

‘Team Rehab’ was already there, nestled against the sides of the tent and each other for warmth, and eagerly awaiting hot water in their coffee mugs and a bowl of steaming oats.

Most of us had been strangers nearly 2 weeks ago and although we come from different cultures, countries and creeds, we quickly identified one common ground – we all loved our wine and alcohol. As there wasn’t going to be any for the next 15 days, we decided to use the time as a sort of rehabilitation and detox and named ourselves accordingly.

Today was the biggy and our leader, Mad, Mountain Man Ian Shooter, briefed us on what to expect.

By now, we knew that a ‘slight hill’ meant a long, gruelling 1 in 2 gradient and that ’40 minutes around the corner’ meant 2 hours on a steep traverse but we nodded energetically and showed gravitas for the importance of what we were going to try and achieve.
Ian is a lovable, bear-sized man who oozes enthusiasm, love of nature in general and the “dragon’ mountains in particular. He’s like a child with a giant sized lego set which he can’t wait to share with his friends. His knowledge of the area and its history is boundless and he can name any obscure peak you care to point a finger at.

He’s fluent in Zulu and bellowing – both of which he uses to engage with his Mnweni porters, who carry our food and tents and fly passed us during the day in their improbable white gumboots and at a speed that makes us feel like we are standing still.

I had found it tough. There are no paths. It’s all in Ian’s head. The terrain is hard – one minute undulating grasses, the next soggy bog and marsh land, waiting to ambush and twist an unsuspecting ankle.

We hike on average for about 7 hours a day, covering about 15 to 20 kilometers, most of it never-ending, arduous and up. We’ve hardly dipped below 3000 meters in altitude and coming from the coast with no preparation, my
lungs immediately went on strike.

I tried not to panic or pant but instead to plod slowly, stopping every few steps. The secret to overcoming altitude is attitude and there’s a ‘L’ of a difference.
The weather has thrown everything at us. We can start the day with snow on the mountains, be pelted with rain or sleet by midday and finish in shorts and t shirts, only to be plunged back in to zero temperatures once the sun goes down.

In brief, unless you are a ‘supreme athlete’, the Drakensberg Grand Traverse is a huge challenge, both physically and mentally and, as our team sweat shirts say, ‘not for sissies’.

So why am I doing it?

I’ve long been aware from friends’ anecdotes of how beautiful the Drakensberg is. Exploring a large part of the spine from North to South seemed like a great way of catching up. But more importantly, I wanted to see and experience the part of the dragon that very few people achieve and that meant leaving behind the comfort and ease of my little life for more than just a weekend.

When you truly immerse yourself in nature you have to forget about showering, washing hair, clean clothes or peeing with privacy.

It’s face, fanny and feet with a wet wipe or a soapless dip in a freezing cold, sparkling mountain stream. You can rinse out underwear and socks but never get
them properly dry and don’t get me started on trying to find a boulder bigger enough to crouch behind in order expose your nether regions to the elements and any unfortunate passing team member.

In return, you will get complete silence.

Maybe interrupted with the distant tinkle of a cow or sheep bell, or the whisper of the wind as the dragon’s breath blows up through the canyons.

Your sense of smell will heighten, and not only for your fellow hikers. The peaty smell of the wetlands, the musty meadow bouquet and the baked flinty smell of the rocks in the midday heat.

Occasionally, the sense of solitude will be broken by the inert outline of a Lesotho shepherd high up on the mountainside against the skyline, his blanketed shoulders and iconic shape of his hat giving him away.

You will also receive one free dazzling sun rise each morning as it peeps over the shadowed mountains and bleeds orange and yellow along the horizon. Standing on the edge of an escarpment, watching the day begin, makes you realize how lucky you are to be alive and how beholden and reliant you are on that orange ball choosing to make an appearance each day.

The days may be brutal but you are rewarded by views and vistas that stretch as far as the eyes can focus.

This landscape was formed when dinosaurs were in charge

and it’s humbling to realize that the erosion and molding will go on long after us humans have left. As you look down through the mist on to the dark, jagged pillars of rock, rising up out of the moss green velvet of the foothills, you can imagine it’s the dragon’s teeth and gums protruding through its fiery breath.
Days without proper sleep and food will cause you to hallucinate like this.

After a warming breakfast and briefing and with their bulging backpacks in place, Team Rehab set off in high spirits, ready to embrace the day. I mused about the highlights so far. Lying on my back on a cliff watching the elusive Bearded Vultures cruise silently above me was pretty cool.

But then so was sleeping in Roland’s Cave. A first for me. It was a bit ‘cosy’ but we all settled down like puppies in a basket.

And the wild Lesotho ponies, looking remarkably well without human intervention, were a pleasant surprise.

However, it was time to focus on the present and that meant trying to keep up with Ian, who was already a black speck in the distance. But I was in no hurry. I was in my element and Ian, and George Clooney, would have to wait!

Why I hiked the Drakensberg Grand Traverse was written by Vivien Marais. Her blog is https://vivificationblog.wordpress.com/