Previous Next
The Amphitheatre in the Northern Drakensberg 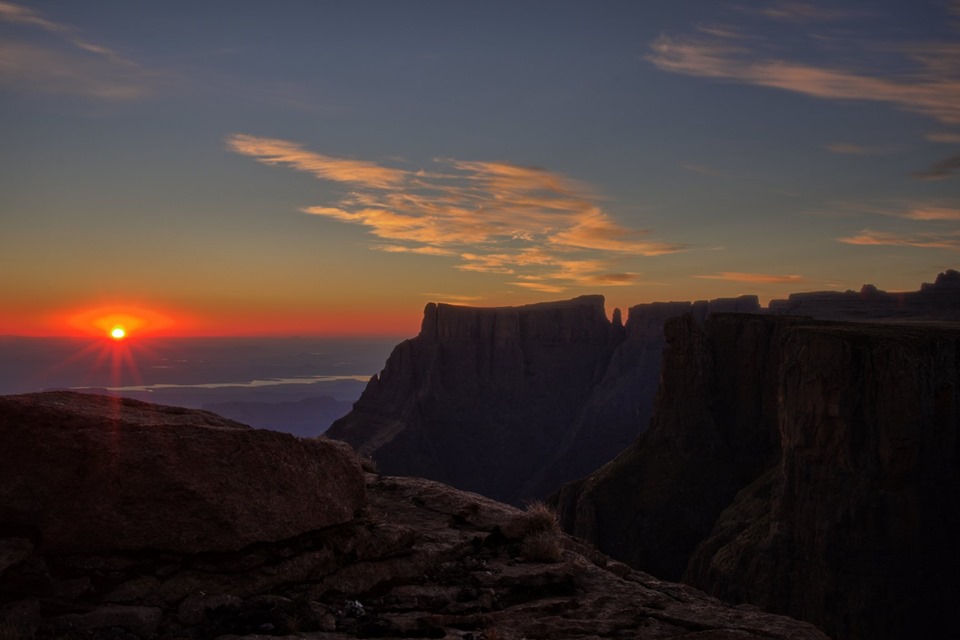 The Amphitheatre in the Northern Drakensberg.

The Amphitheatre in the Northern Drakensberg is certainly an impressive mountain. It is found right at the Western border of the Ukhahlamba Drakensberg park with the huge Sentinel (3165m) at the end. This big Basalt wall stretches for 5km to the Eastern Buttress (3124m) at the other end. Once on top of the Amphitheatre it seems quite flat compared to the rest of the Drakensberg. Read here about our 2 day hike to the Amphitheatre.

Just 2km away is the inconspicuous “hill” Mont aux Sources.

At 3282m above sea level it was once thought to be the highest peak in SA. But it is still very special. You can say it is the watershed of Southern Africa. On one side the mighty Tugela river has it’s source here. The Thukela the “sudden or startling one” falls over the Amphitheatre wall onto the foothills below. Falling 948m makes it the 2nd highest waterfall in the world. After falling down a huge cliff the Tugela river ends up in the Indian ocean. On the other side of Mont aux Sources water rises to join the Orange river and ends up in the Atlantic ocean far away.

Mont aux Sources was named after 2 intrepid French missionaries who reached the summit from the Lesotho side.

The Zulu’s  call it Emphofeni – place of Eland although I don’ know why. I have never seen Eland way up there.

Below the Amphitheatre is Royal Natal National Park.

It became a National park in 1916 and is now over 8000ha. The path used to get to the top of the Amphitheatre is relatively easy from the Sentinel car park. It starts at 2500m and the top of the famous chain ladders is only 450m higher plus is only 6km from the car park to the Tugela falls.

The Mountain club of South Africa built a hut on top that had beds, a stove, fire place and even chairs and a table. Unfortunately we live in a world full of vandalism and now I way prefer to camp in a tent near the Amphitheatre edge.

Of course Crows nest cave is close by and can fit 4 people nicely.