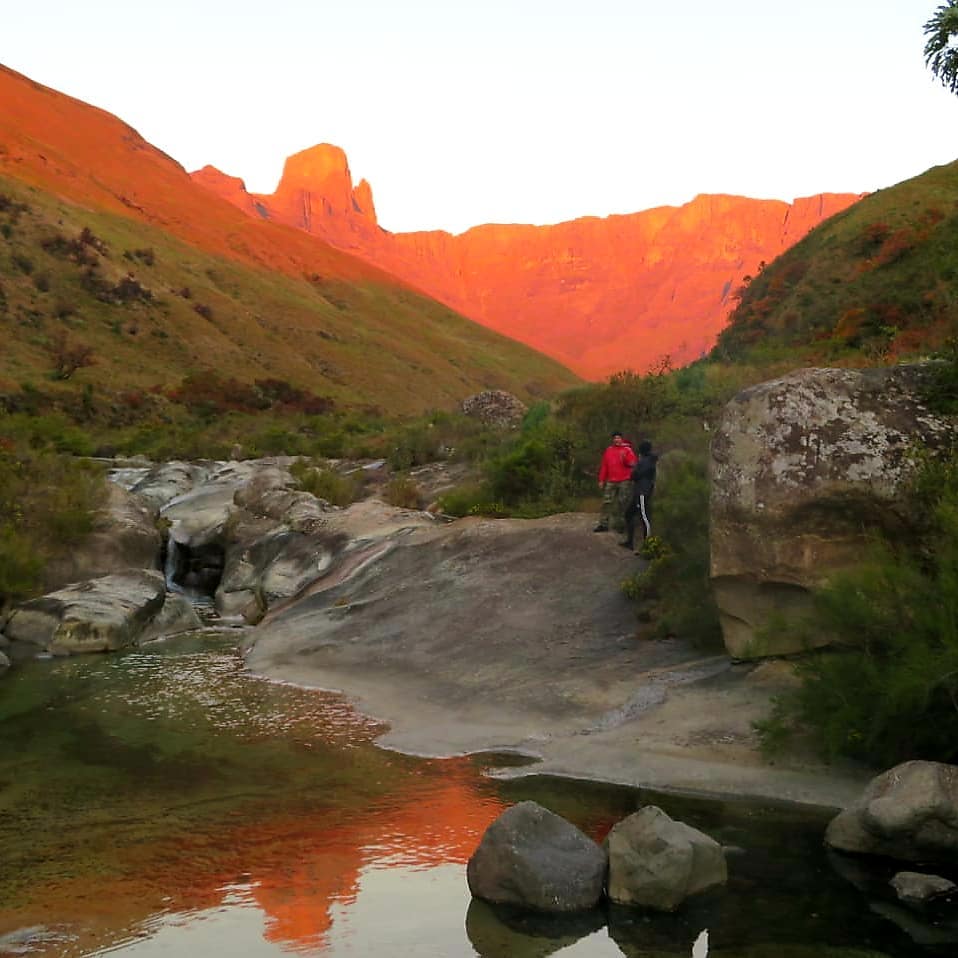 Mafadi is South Africa’s highest peak that almost every South African has never heard of.  I am continually amazed that so many of us are quick to spend a fortune climbing the highest peak in Africa for the sake of ‘Kili’ bragging rights on Instagram. There is a far cheaper, challenging, and rewarding opportunity on our doorstep!  Fortunately, me and a few like-minded souls gathered at Injisuthi camp to take on the challenge presented by Mafadi this past weekend. Boy what an adventure is was!

Injasuthi means “satisfied dog” in Zulu and is one of my favorite parts of the Drakensberg.

Our group comprised two experienced Swiss hikers, two first-time hikers from South Africa, and two thoroughly seasoned hikers that have hiked with Drakensberghiker before so quite a varied group. Assisting us all was Drakensberg Hiker’s crack team of porters: youngster Teta, veteran Spalie, stoic Spamandla, and the boss, Sdudla. Read about us here.
Anyone who has climbed Mafadi knows that it is one of the toughest hikes the Drakensberg has to offer –

One does not simply ‘conquer’ Mafadi; rather, the Drakensberg allows you to summit her if she is in a generous mood!

Having said that all you really need is a sense of adventure and a love of wild open spaces in the mountains. Oh and not having a hot shower for 3 nights.

The first challenge of the day – Heartbreak Hill.  This is quite possibly the stiffest climb on offer in the ‘Little Berg’ and just after lunch. Don’t eat too much!! The morning started off a bit misty but you could easily be forgiven for thinking you were in heaven. Such was the magnificence of the scenery unfolding before us as the mist began to clear!

On top of Mafadi Peak

Overnight, a fierce wind had cleared away all of the cloud and we woke to the splendor of the Trojan Wall and Injisuthi Triplets bathed in the pinky orange glow of sunrise.

Having briefed the group on the Northern High Approach to Corner Pass, and the challenge of Corner Pass itself, we set off on the particularly brutal climb that day two smacks you in the face with!  There are approximately ten meters  of flat warm up area from Centenary Hut. Then a relentless, pathless ascent begins to one of the most spectacular ridge lines in the whole of the Drakensberg.  From here one has a jaw-dropping view of what I like to call the ‘Castle Vista’. An uninterrupted view all the way from Champagne Castle in the north to Giant’s Castle in the south. While the imposing Trojan Wall and Injisuthi Triplets towering over the ridge.

Truly, this is a view that no photograph could ever do justice to!

After completing the walk along the ridge, the first major challenge of the day lay in front of us. A tricky rock scramble that takes you higher, and closer, to Corner Pass.  A few of our group had stated their fear of heights, but I was amazed to see them all take on the challenge without the security of a rope!  I had used one of Ian’s favorite motivational phrases – ‘if you’re not on the edge, you’re taking up too much room’. That seemed to inspire everyone and the whole group took the opportunity to leave their comfort zones immediately!

Mafadi is South Africa’s highest peak and shouldn’t be easy!

It took a lot of effort from the group to get past the crux of the pass, but they all did so with admirable grit and determination.  Pieter even forgot about his own fear of heights and climbed over before we had even fixed the rope!  As we stepped out of the pass into the Lesotho sun, we consumed some much needed calories. After lunch began the long slog up the the nek between Mafadi and the Injisuthi Dome, our camp for the night. Its not often that you get to camp between the highest and second-highest peaks in South Africa!

Pieter proudly unfurled the DRC flag to celebrate his Congolese heritage. Next up was another favorite ridge of mine, which leads from Mafadi to the top of Leslie’s Pass via Sombrero Peak.  Being the watershed between South Africa and Lesotho, this section constantly meanders between the two countries. At the same time providing absolutely stunning views over the Injisuthi Buttresses.

I love the wildness of Leslie’s Pass.

It has everything from the usual steep gravel paths, tough rocky sections, a precipitous section through overgrown vegetation and, finally, a lovely path down a grassy ridge into the valley below.  It is, however, a big descent – from the top of Mafadi to the bottom of the pass is a quad-shredding 1350m (vertical!) That was certainly felt by all.  The cold waters of the stunning Marble Baths at our last campsite were used to great effect to treat our aching legs that afternoon!  Today was David’s birthday and we celebrated with some biltong and a bottle of whiskey before turning in for the night.
Our last day was an easy walk back to the Injisuthi Camp in absolutely glorious weather.  I got the sense that everyone was just taking in what they had achieved and reflecting on just how far outside of their comfort zones they had been able to travel.  Now that the weather was clear, the group was able to take in the scale of the escarpment and the difficulty of the route we had hiked.  All of them were happy they were not able to see the looming ramparts of the Dragon Mountains on the way up, but I suspect that the Berg bug has bitten and this is not the last we will see of them!